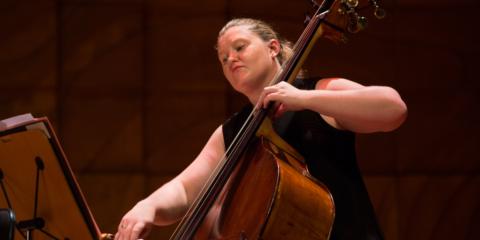 MCO’s Bach Suites can be heard in Melbourne on Thursday 22 November at The Deakin Edge, Federation Square and Sunday 25 November at Melbourne Recital Centre.

MCO: Bach’s well known for religious music and the tone is often quite serious; these Suites are really a different Bach from that. What’s the background of the “overture” or “Suite” and the context of these works that makes them stand apart?

Emma: One of the most remarkable aspects of Bach’s phenomenal compositional output is its diversity – he traversed sacred and secular music, and almost all instrumental and choral forms. Bach was often influenced by his place of employment and it is believed that his third orchestral suite was composed around 1731 for a secular musical organisation in Leipzig called theCollegium Musicum, which Bach directed from 1729. This ensemble took part in a weekly concert series at the coffee shop of Gottfried Zimmermann, a devoted patron to the arts who equipped his venue with the latest instruments. Many of Bach’s instrumental works from this time were composed for Zimmermann’s concert series.

The four orchestral suites were originally called Ouvertures by Bach, which references the opening movements which are grand French-style overtures that tower over the lighter dance movements that follow in both length and gravitas. When Mendelssohn, who was responsible for reviving Bach’s music in the early 19th century, played the first movement of Bach’s third orchestral suite to Goethe, the celebrated poet said that he could envisage a procession of elegantly dressed people proceeding down a great staircase. The dance movements differ in each suite and represent the most popular dances of the day – stately Gavottes, energetic bourrees, elegant menuets and, in the fourth suite, a Rejouissance (which literally translates to mean “rejoicing”), which is overbrimming with joy. The Air from the third suite is by far the best known of all the movements – its beautifully simple melody was popularised by August Wilhelmj’s 1871 arrangement, “Air on the G String”.

Bach’s orchestral suites are often seen as foreshadowing the Galant period of the mid-18th century, which was a reaction to the complexity of the late Baroque period and focused on simplicity and elegance. They reveal yet another facet of Bach’s compositional style, which he was continuously developing and reinventing. This program also features Bach’s Double Violin Concerto, undoubtedly one of his most loved and recognised works. From the energy and interplay of the outer movements to the seemingly unending melodic lines of the stunning slow movement, this work is a joyous celebration of string sound.

MCO: Richard Mills has written a new concerto for us (exciting!) — having seen the score, what kind of music should people expect?

Emma: It is always such a privilege to work on a completely new composition, especially when you have the opportunity to collaborate directly with the composer. Richard Mills will be conducting his double concerto so I am looking forward to hearing his insights into the music and working together to bring his vision for the work to life. The first movement, Fantasia, features weaving melodic lines through both solo parts and offers ample opportunities for virtuosic display not only from the two solo violins but also from the entire ensemble. The second movement Canzona is clearly deeply inspired by vocal music and is full of expansive lyrical lines. The final movement is a wild romp and is full of exciting, uneven rhythmic patterns and constantly changing meters. The etymology of its title – Dithyramb – refers to a wild choral hymn of ancient Greece dedicated to Dionysus, the God of wine and ecstasy. I have no doubt it will be a flurry of activity and great fun to play.