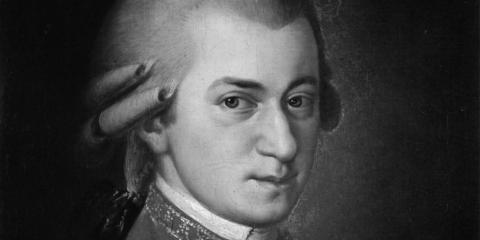 MCO’s “Mozart & Weiland Quartets” can be heard on Thursday 9 December 7:00pm AEST on Melbourne Digital Concert Hall via live stream and live in the studio audience at the Athenaeum Theatre, Melbourne.

Mozart describes in his dedication of 1 September 1785 that the works were ‘the fruits of a long and laborious endeavour’ associated with his study of Haydn’s Op 33 quartets. Cliﬀ Eisen and Stanley Sadie in Grove Music Online state “like Haydn’s, Mozart’s quartets are characterized by textures conceived not merely in four-part harmony, but as four-part discourse, with the actual musical ideas linked to a freshly integrated treatment of the medium”.

The D minor quartet K421 is the second of the six quartets and was composed in June 1783. It is the only quartet in this set in a minor key. The Allegro moderato in sonata forms opens quietly before the dramatic expansion of dynamics and emotional range marked with considerable interplay between the parts. Here we have the contrast between the two themes – the first in D minor with the second in F major. Writing about this movement Kai Christiansen said “Despite episodes in a major key, the minor key triumphs, pulling light into dark, hope into despair. In doing so, even the brightest musical interludes labor in shadow. As a special occasion, such a work is particularly compelling, delectable in its devastation”.

The Andante is in F major and provides a sense of respite to the opening movement. The simplicity of the fragmented melody is complemented by the complex central section. In the Menuetto and Trio marked Allegretto there is a return to D minor and is intensely chromatic. The tragic mood pervading the menuetto is contrasted to lively trio with the first violin accompanied by the other strings playing pizzicato. The finale, Allegretto ma non troppo has a lilting main them followed by four variations and a coda. Each variation explores diﬀerent techniques and dynamic contrasts and showcases each of the instruments. The fourth variation is in F major allowing for a contrast of mood before the final Più allegro in D minor while ending in the major key.

Along with Fourth & Fifth Quartets (2011 / 12) for William Hennessy, two Piano Trios (1996 /2003) for Claus-Christian Schuster’s Altenberg Trio Wien, a large-scale Flute Concerto (2014) for Susan Milan and the 2019 Requiem, these and a ﬂurry of new works well represent his artistic contribution today.

Weiland’s works are held in the Schusterwerkstatt at the Brahms Museum, Mürzzuschlag, Austria.

Douglas’s association with Australia began five years before he became a founder member of the Australian Quartet (ASQ) when, in 1980 he was invited by William Hennessy to occupy Sydney String Quartet’s second violin chair for Musica Viva’s ‘winter’ concerts that year. For over forty years that association has deepened and widened exponentially.

Written for William Hennessy and the Melbourne Quartet the work is dedicated to the Viennese musician-grandee, Claus- Christian Schuster and his late wife Dr.
Zaouré Schuster.

At just short of fifteen minutes the single- movement work is built as a free-standing scherzo with two trios. Both trios are unique worlds in themselves, bound together structurally and harmonically; ‘harmonic’ in the sense of their tonality being overall more settled, in contrast to the ﬂuctuations in orientation seen in the scherzo.