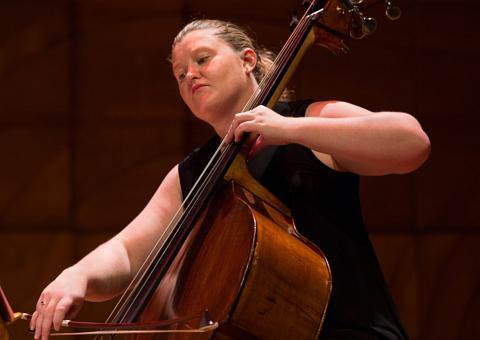 In our regular series, we spoke to our Principal Bass Emma Sullivan about the music in our upcoming performances, Romance.

MCO: This concert is named Romance, which is a reference to the title of the Dvořák work, but also to a program that is all music of the Romantic period. What is this Romantic period and what kinds of things will we hear that are different and special?

EMMA: The Romantic period was a movement in Western art music that emerged early in the 19th century. The music of the Romantic era was expressive and emotive, exploring a broader spectrum of dynamics, tone colour and harmonic language than that of previous periods. The works featured in our Romance program are full of soaring melodies and exhibit the lush sound world synonymous with Romantic style. It was common for Romantic repertoire to be programmatic and draw from external inspiration including literature, visual art and philosophy. I believe this is why musicians and audience members often feel so connected to this music. The featured works by Verdi and Mendelssohn both draw from external stimuli. The achingly beautiful Overture to Act III of Verdi’s La Traviata is not only a reflection of Violetta and Alfredo’s love story but also foreshadows its tragic end. Mendelssohn’s Italian Symphony is an audible homage to his travels through the country in his early twenties.

MCO: How is playing Romantic music different for you as a player?

EMMA: One of the significant differences in approaching Romantic music compared to repertoire from earlier periods is in the approach to sound. Romantic repertoire demands a rich tone with a consistent and warm vibrato. It is also full of long, lyrical phrases, which require a smooth and connected approach to the bow. As a string player, I find the best way to achieve this Romantic sound world is to imagine I am singing through my instrument.

MCO: Some of these works are often played by much larger symphony orchestras. Is this really MCO repertoire?

EMMA: There is no doubt that many of the works featured on this program are commonly performed by much larger forces. However, I believe MCO will be able to bring a clarity and intimacy to the music that is difficult to achieve in a larger orchestra. The smaller ensemble will be a particular advantage in our two works with soloists, as it will allow us to provide Konstantin and Markiyan with freedom and flexibility.

MCO: Which work(s) are you most looking forward to?

EMMA: I am really looking forward to performing Mendelssohn’s Italian Symphony. It is full of life and character, which makes it great fun to play. From the joyous energy of the first and final movements to the elegant restraint and charm of the middle movements, Mendelssohn evokes for all of us his impressions of Italy – and encourages us to conjure our own.