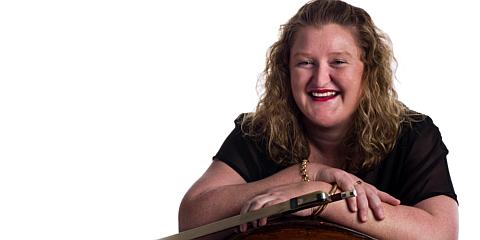 MCO: This program is called Passionate Romantics, referring to the Romantic era of musical composition. What will people hear that’s different to music from other eras?

EMMA: The music of the Romantic era is expressive, evocative and emotive. Works from this time explore every possible avenue of expression and colour and often feature dramatic contrasts of dynamics, pitch and articulation. Audiences will hear incredible tonal variety from the string orchestra – from the most intimate whispers to the grandeur of a rich, full string sound. A key feature of Romantic music is lyricism and both Dvořák and Glazunov works comprise long, singing melodic lines that are perfectly suited to string playing. Romantic writing also tends to have greater freedom of form, which can make it less predictable for the listener. This is particularly notable in Glazunov’s Violin Concerto, where the three movements are played as one continuous entity, without clear breaks. Composers of the Romantic period drew inspiration from art, literature and nature, often using their music to tell a story or convey specific emotions. They also often drew from the folk music of their homelands. This is distinctive in both featured works – the rustic and exhilarating final movement of Dvořák’s Serenade is littered with melodic and rhythmic references to Czech folk music and Glazunov’s writing is heavily influenced by traditional Russian music.

MCO: Serenades for Strings are staples of the Romantic string orchestra repertoire: Tchaikovsky, Elgar, Suk come to mind. What’s the meaning of “Serenade” and where does the genre come from?

EMMA: The etymology of the word, Serenade, connects the Latin serenus, which means calm or serene, with the Italian sera, which refers to evening. In their earliest forms, serenades were vocal works, often associated with love and courtship, and were performed in the evening. Mozart often featured this form of serenade in his operas – one such example is “Deh, vieni alla finestra” (Oh, come to the window) from Don Giovanni. This aria is reminiscent of the earliest serenades, using a mandolin accompaniment.

During the 18th century, the Serenade was adopted as an instrumental form. Again, Mozart was pivotal in this development, composing numerous serenades to be performed in the evenings or for special social occasions. Arguably his most famous offering in this genre, Eine Kleine Nachtmusik (A Little Night Music), has become one of the most loved and recognisable works for strings of all time.

By the 19th century, the orchestral form of the Serenade began to dominate and many of the great Romantic composers composed wind, string and orchestral serenades. The serenades for strings by Tchaikovsky, Elgar, Suk and Dvořák are staples of string orchestra repertoire – and are some of our favourite works to perform.

MCO: The Glazunov concerto in this program is a new arrangement for string orchestra by Adelaide-based composer and violist Keith Crellin. How would you compare the arrangement to the original?

EMMA: The original orchestration of Glazunov’s Violin Concerto calls for a large-scale Romantic orchestra that includes wind, brass and percussion sections, as well as harp. The obvious point of difference between the original and Keith’s new string orchestra arrangement is the instrumentation. Fortunately, string instruments are extremely versatile so I am looking forward to exploring the diverse colours and timbres we can produce in bringing this new version to life.

Although it will be a challenge to recreate the richness of a full symphonic sound, the advantage of having smaller forces is that they will afford our soloist ample scope for expression and clarity. This concerto is an absolute tour de force for the soloist, and is characterised by rich, lyrical melodic lines. It is the perfect vehicle to showcase Markiyan’s musicianship and technical command of the instrument.