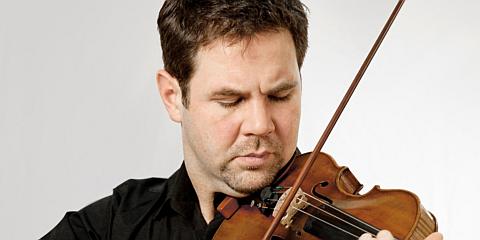 Andrew Haveron is the violin soloist for the Tchaikovsky Violin Concerto in MCO’s Jovian Worlds concerts. The concerts can be heard in Melbourne on Thursday 28 February and Sunday 3 March at Melbourne Recital Centre.

MCO: The Tchaikovsky concerto is one of the staples of the violin repertoire. Tell us about your earliest memories of this work.

Andrew: I literally cannot remember NOT knowing this piece. As a child I devoured violin music—helped enormously by my mum, who scoured the radio listings for interesting broadcasts and recorded them onto cassette for me! My earliest memory is of a broadcast by Joseph Silverstein, the Concertmaster of the Boston Symphony Orchestra—such a refined, elegant and masterful player. Unfortunately, technology being what it was in those days, the washing machine used to interfere with the radio reception in our house. As it entered its most vigorous spin cycle it produced a sort of ambulance siren noise on the speakers. I didn’t know about that back then but was bitterly disappointed later when I discovered Tchaikovsky hadn’t written those weird glissandi into the violin part…

MCO: What do you think are the challenges of this music for violinists?

Andrew: It is an enormously challenging solo part—for stamina as well as other technical things. When faced with those challenges we instrumentalists can easily make the mistake of adding the physical struggle into our interpretation of the music, which often isn’t required. Like a top ballerina, we must try to seem effortlessly graceful whilst secretly gritting our teeth and ‘riding the pain’!

MCO: Which are your favourite recordings of this concerto, and why?

Andrew: It would be foolish not to respect the great Russian masters in this repertoire. David Oistrakh has always been my ‘go to’ reference, but equally Jascha Heifetz —after all, he studied with the work’s original dedicatee, Leopold Auer. His interpretation is only one step removed from what Tchaikovsky must have had in mind (even though Auer famously turned it down at first as ‘unplayable’!)

MCO: Which other Tchaikovsky works do you most look forward to playing, as a concertmaster, chamber musician or solo violinist?

Andrew: I particularly love Tchaikovsky’s string quartets—and recorded them all when I played in the Brodsky Quartet. You will hear music from the most famous one—no.1—in this concert with MCO, but my real favourite is no.3, which is somewhat ignored in String Quartet recitals. It is rather ‘orchestral’ in its concept (which makes it challenging for four players) and one day soon I hope to make my own orchestration of it, which I hope will make the music more accessible. It really is a masterpiece. Perhaps the MCO would be interested when I get around to it…?