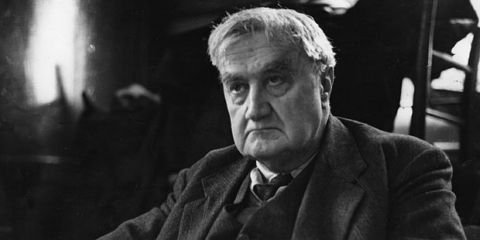 MCO’s “The Lark Ascending” can be heard on Thursday 27 May 7:00pm AEST on Melbourne Digital Concert Hall via live stream and live in the studio audience at the Athenaeum Theatre.

Ralph Vaughan Williams (1872-1958) was a significant English composer, teacher, writer and conductor of the last century. He was engaged in a wide range of musical activities over his life and his compositions reflect great diversity in style and genre. As a composer he wrote for a broad range of genres including orchestral and choral music, incidental music for theatre, films and radio, through to hymn tunes, carols and songs. He expressed the English spirit in so much of his work.

Phantasy is an old English spelling of Fantasia and was adopted by Walter Wilson Cobbett in 1905 for a chamber music competition sponsored by the Worshipful Company of Musicians. The direction for the competition was for a contemporary view of the Tudor and Stuart fantasias for a defined ensemble with contrasting sections where the imagination was allowed to reign. Some of the British composers who entered and won this competition included Frank Bridge, John Ireland, Herbert Howells, Thomas Dunhill and Vaughan Williams.

The Phantasy Quintet was written in 1912 and first performed 1914. It is scored for two violins, two violas, and cello. The work is in four short movements commencing with Prelude announced by the solo viola. The Scherzo is a wonderful play of alternating meters where one bar is in four and the next in three. The pulse gives a lovely lilting sense of a playful drive. The Alla Sarabanda: Lento is a slow reflective muted movement without the cello. The spirited Burlesca is a number of contrasting sections that takes us through to a range of characters with a return to the opening prelude theme to bring the work to a close.

The Lark Ascending is a poem by the English poet George Meredith reminiscing about the song of the skylark.

Ralph Vaughan Williams (1872-1958) was inspired to write a Romance of the same name for violin and piano in 1914. The first performance of the work was in 1920 and the composer scored the work for violin and orchestra that was premiered in 1921. Vaughan Williams inscribed selected non-consecutive lines from the poem on the score. He included the opening and concluding lines: “He rises and begins to round, He drops the silver chain of sound, Of many links without a break, In chirrup, whistle, slur and shake. For singing till his heaven fills, ’Tis love of earth that he instils, And ever winging up and up, Our valley is his golden cup And he the wine which overflows to lift us with him as he goes. Till lost on his aërial rings In light, and then the fancy sings.” The work is a remarkable evocation of the English landscape.