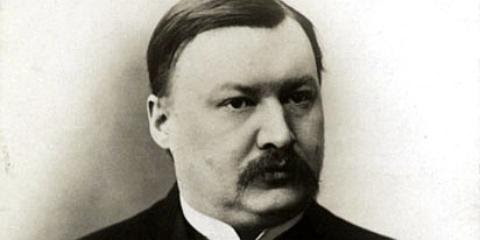 Aleksandr Konstantinovich Glazunov (1865–1936) was a Russian composer, conductor and scholar. A prodigious composer, from an early age established links between Russian nationalism and the developing European traditions. He studied with Rimsky-Korsakov and was initially supported by the great arts patron Mitrofan Belyayev.

He became a professor at the St Petersburg Conservatoire in 1899 and in 1905 was elected Director – a position he held until 1930. During this period he not only oversaw the transition from Imperial to Soviet Russia, but continually developed and enhanced the curriculum along with the conditions of the students and staff. The time of his election as Director coincided with the composition of two of his most performed works: the Violin Concerto, and Symphony No 8. He travelled extensively and his works were performed both within and outside Russia.

He was the direct heir of Balakirev’s nationalism but tended more towards Borodin’s epic grandeur. At the same time he absorbed Rimsky-Korsakov’s orchestral virtuosity, the lyricism of Tchaikovsky and the contrapuntal skill of Taneyev. … He remains a composer of imposing stature and a stabilizing influence in a time of transition and turmoil.

The Violin Concerto was composed in 1904 and received its first performance in February 1905 at the Russian Music Society concert in St Petersburg. Leopold Auer was soloist (and dedicatee) with the composer conducting. The work received its British premiere the following year with Auer’s 14 year old student Mischa Elman performing as soloist and Sir Henry Wood conducting.

The work is presented as a single continuous movement without a break. It is dominated by a rhapsodic quality that provides contrasts of mood, tempo, melody, passion and lyricism. Structurally the work emerges from the opening Moderato through the Andante sostenuto with the technically spectacular cadenza, and the Allegro finale.

The original work is scored for an orchestra of piccolo, 2 flutes, 2 oboes, 2 clarinets, 2 bassoons,4 horns, 2 trumpets, 3 trombones, timpani, glockenspiel, triangle, cymbals, harp, strings. Keith Crellin’s arrangement of the work for strings that we hear in this program beautifully captures the essence of the original.

Antonín Dvořák (1841-1904) was a Czech composer of symphonies, operas, oratorios, songs and chamber music. His compositions across many genres display a strong sense of nationalism.

The Serenade for Strings in E major Op 22 was composed in a matter of days, from 3–14 May 1875, and first performed in Prague in December 1876. Interestingly, Dvorak initially published the work as a piano arrangement for four hands in 1877 – a year after the original string performance.

As with many compositions written under the title of serenade, this work expressively exudes a great sense of carefree joy. Most profoundly, it is dominated by a beautiful sense of lyricism.

The five movements are concise and complementary and filled with expressive contrasts. With the exception of the finale, each of the movements is in A-B-A form – with an idea presented, contrasted and a return to the original material. The flow and charm of the opening Moderato is contrasted with the lilting waltz in the second movement with its longingly melancholy trio. This is then followed by the humorous Scherzo that leads to the still and tranquil Larghetto which is the heart of this composition. The Finale. Allegro vivace is in the style of a spirited folk dance.