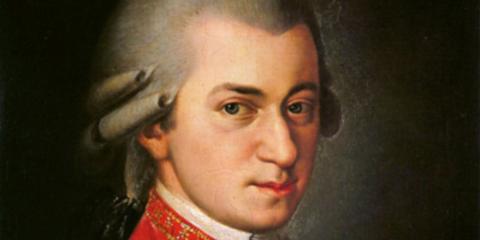 MCO’s Mozart & The Violin can be heard on Thursday 17 November 7:30pm and Sunday 20 November 2:30pm at Melbourne Recital Centre.

Josef Mysliveček (1737–1781) was a Czech composer who was born in Prague and died in Rome. After initial studies in Prague he left for Venice in 1763 to study operatic composition with G.B. Pescetti and had his first opera performed in Bergamo in 1765. He enjoyed great operatic success and travelled throughout Europe.
He met Leopold and Wolfgang Mozart in March 1770 in Bologna and remained friends until 1778. In the Mozart correspondence he is one of the composers most frequently mentioned and he provided a model for some of Mozart’s works at this time.

In addition to being a renowned opera composer in his time, Mysliveček wrote a considerable number of chamber and keyboard works, but it is his symphonies that form his major contribution to instrumental music. Daniel E. Freeman in Grove Music Online said “Mysliveček’s symphonies are cast in three-movement format and are essentially indistinguishable in style from his opera overtures, which were unsurpassed in Italy and frequently disseminated as independent works. The strength of his writing lies in his keen mastery of textural subtleties, lyrical melodic style and harmonic inflection.”

The Symphony in A major is probably one of a group of symphonies written in the early 1770s. There is a sense of grace and elegance through each of the movements. The opening Allegro con brio is in sonata form and there a great spirit of drive and momentum. This is contrasted to the gentle Andantino, before a return to the opening character in the Allegro finale, also in sonata form.

The concertos were performed often by Mozart (who was also a skilled violinist) and Antonio Brunetti, an accomplished violinist in the Salzburg court orchestra. Although not published until after Mozart’s death, they have remained in the repertoire ever since. The works display a delightful balance between brilliance and expressive lyricism.

As with the other violin concertos, this work is scored for solo violin, two oboes, two horns, and strings. The opening Allegro exudes a great sense of confidence and displays both elegance and grace; the melodies played by the soloist interplay intricately with the orchestra. In the Andante cantabile, the soloist is charged with the beautiful uninterrupted melody that dominates this movement with a sense of serenity. The Rondeau: Andante grazioso – Allegro ma non troppo provides ongoing contrast between the main themes with their differing tempos. A dance-like quality imbues this charming movement that gracefully concludes without fanfare.

Caerwen Martin
Stars come out in a midnight sky (2018)

Caerwen Martin is a Victorian composer and cellist. They write acoustic and amplified performance-based scores and digital and analogue works, often combining these practices. Their work is inspired by science, the environment, dreams, issues of social significance, LGBTI+ rights, spirituality and religion, and significant emotional experiences. Caerwen works in graphic, alternative and conventional notation, using visual art practices such as photography and free-hand sketching to access intuitive creativity. Their works include commissions for orchestra, chamber ensemble, solo artists, choir, film, dance and theatre.

The composer writes: “The title for this piece is best described by a quote from Martin Luther King “Only in the darkness can we see the stars.” What I take from this is that during times of great trial and hardship, we reach an understanding of the magnitude of life. I wrote this piece for the young people I met during my time researching this piece in the Royal Children’s Hospital and Monash Children’s Hospital, for they are all stars in their own right.”

Jean Sibelius (1865–1957) was a Finnish composer and one of the great European compositional voices of the early twentieth century. His output included seven symphonies, the violin concerto and several tone poems and incidental music.

As a violinist, he composed a number of works for the instrument. At the forefront is the monumental Violin Concerto Op 47. There are other works including the Serenades Op 69 and the Humoresques Opp 87 and 89.
The Suite for violin and string orchestra was composed in 1929 and he assigned the opus number 117; but it was another 25 years before the work was published. It is one of his last compositions: despite his long life, he composed relatively little in his final three decades. The Suite is in three short movements following the descriptive mood of the titles: Country Scenery, Evening in Spring, and In the Summer. These miniatures are wonderfully evocative.

Joseph Haydn (1732–1809) is often considered the “father of the symphony”. James Webster, writing in Grove Music Online, states that “there is no other genre in Western music for which the output of a single composer is at once so vast in extent … so historically important and of such high artistic quality.” His 104 symphonies spanning his compositional output provide immense insight into the development of the form that was taken up by Mozart and Beethoven and their successors.

Symphony No 52 in C minor was completed around 1772 and published in 1774. It is among a group of symphonies where Haydn was trialling different musical ideas, particularly around rhythmic and harmonic complexity, dynamic contrast and an increased use of counterpoint. This symphony is often referred to as a precursor of many later works in the same key by Mozart and Beethoven.

The four movements of this work are scored for two oboes, bassoon, two horns and strings. The opening theme of the Allegro assai is dramatic and breath-taking and is contrasted to the second more graceful theme. The ideas are thrown about with abandon. The Andante in C major provides some reprise from the turmoil of the opening movement but there remains a sense of uneasiness throughout. The third movement contrasts beautifully with the articulated minuet and the courtly trio. The work concludes with the Finale Presto which is spectacularly unrelenting in its drive and flurry.