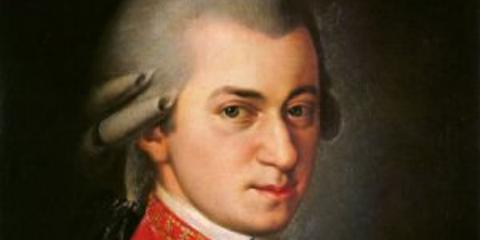 Jovian Worlds is the first concert of MCO’s 2019 season. The concerts can be heard in Melbourne on Thursday 28 February and Sunday 3 March at Melbourne Recital Centre.

Symphony No 41 is scored for flute, two oboes, two bassoons, two horns in C, two trumpets in C, timpani, and strings. The longest of his symphonies, it is monumental in its scope and scale. The name Jupiter was not given by Mozart but by the London-based impresario Johann Peter Salomon.

The symphony is in four movements: fast, slow, minuet, and fast. With the exception of the minuet and trio the movements are in sonata form. The opening Allegro vivace has a fanfare-like quality with the two main themes playing against each other and marked by dramatic outbursts.

The muted Andante cantabile is a sarabande and constructed as a series of phrases in the form of a question and answer. This is a densely complex movement with personal and profound statements. The Menuetto–Trio has the character of an Austrian ländler – a folk dance. It is within the final section of this movement that Mozart introduces the four-note motif that is the basis of the final movement.

The Molto allegro finale is one of Mozart’s most complicated statements, combining a fugue within the structure of sonata form. The four-note motif (C, D, F, E) is introduced by the violin and is gradually elaborated and combined with several counter-subjects. At one stage there are five different ideas playing against each other.

In discussing the final movement, Peter Laki, writing for the John F. Kennedy Centre stated, “two worlds collide in this magnificent finale: the strict contrapuntal technique inherited from the Baroque and the freer, ‘galant’ idiom of the Classical era. The seamless synthesis of those worlds was an achievement unmatched even by Mozart. Music has never been closer to what 18thcentury philosophers called the ‘sublime’, a term defining an experience at once powerful, uplifting, and transcendent. It is, no doubt, this sublime quality that invited the association with Jupiter, the chief of the gods in Roman mythology.”

The Russian composer Pyotr Il’yich Tchaikovsky (1840-1893) is known more for his symphonies, concertos, operas and ballets than his chamber music. Across his life he wrote a handful of chamber works including the Piano Trio, Souvenir d’un lieu cher, Souvenir de Florence and three string quartets – written between 1871 and 1876 in the traditions of Beethoven and Schubert.

String Quartet No 1 in D major was composed in February 1871 for a concert of the composer’s music. In four movements it features the beautiful Andante cantabile that Tchaikovsky later arranged for cello and strings in 1888. The opening movement, Moderato e semplice, in sonata form, is sonorous, lyrical and measured and features an exciting middle section where the themes are expanded and developed.

Tchaikovsky’s Violin Concerto in D major Op 35 is one of the best known violin concertos in the repertoire and is considered one of the most technically difficult.

The work was completed in March/April 1878 when the composer was in Clarens on Lake Geneva where he had retreated after his marriage breakdown. He was there with his composition student and violinist Iosif Iosifovich Kotek who played through much of the concerto as it was being written. Although Tchaikovsky initially wanted to dedicate the work to Kotek, it was eventually dedicated to Adolph Brodsky who premiered the work in Vienna in December 1881.
The concerto is scored for two flutes, two oboes, two clarinets in A and B-flat, two bassoons, four horns in F, two trumpets in D, timpani and strings.

The opening Allegro moderato commences with a gentle lilting theme that gradually emerges into a virtuosic encounter. Through the developing virtuosity the lyricism is never lost. The brilliant cadenza is placed after the development section and provides a peak within the movement rather than towards the conclusion to the movement.

The expressive folk-like Canzonetta is nostalgic and provides a welcome reprise from the excitement and intensity of the opening movement. It proceeds to the final movement without a break. The sheer energy of the Allegro vivacissimo final movement ebbs and flows to produce a breathtaking dialogue between the soloist and the orchestra.

Like many of Tchaikovsky’s works the concerto had a mixed reception at its premiere. It is rare to read any writing about the concerto and its premiere without reference being made to the Viennese critic Eduard Hanslick (1825-1894) who reserved some of his most vitriolic and quotable comments in his review in the Neue freie Presses:

The Russian composer Tchaikovsky is surely not an ordinary talent, but rather an inflated one, with a genius-obsession without discrimination or taste. Such is also his latest, long and pretentious Violin Concerto. For a while it moves soberly, musically and not without spirit. But soon vulgarity gains the upper hand and asserts itself to the end of the first movement. The violin is no longer played; it is pulled, torn, drubbed. The adagio is again on its best behavior, to pacify and to win us. But it soon breaks off to make way for a finale that transfers us to the brutal and wretched jollity of a Russian holiday. We see plainly the savage vulgar faces, we hear curses, we smell vodka. Friedrich Vischer once observed, speaking of obscene pictures that they stink to the eye. Tchaikovsky’s Violin Concerto gives us for the first time the hideous notion that there can be music that stinks to the ear.

Despite these words, the work grew in reputation as it was premiered internationally and took its place of prominence in the repertoire. So much for the opinions of critics!