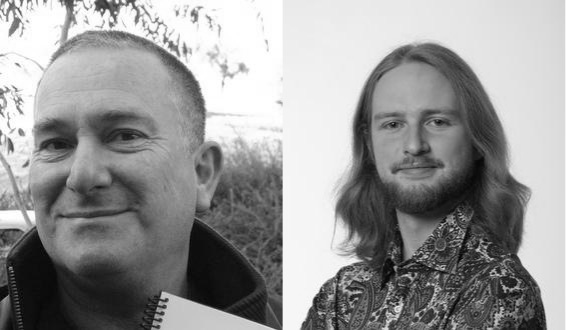 Melbourne Chamber Orchestra performs Double Entendre with musicians from the Australian National Academy of Music on Friday 6 June at 7pm.

Peter de Jager is steadily gaining more recognition as a composer, having already built a reputation as a sought after solo and collaborative pianist and harpsichordist. He studied composition with Elliott Gyger and Stuart Greenbaum at the University of Melbourne. In 2012 he was young composer in residence at ANAM, writing four works that were performed by students throughout the year. His influences are many, including Bach, Byrd, Frescobaldi, Plainchant, Rachmaninoff, Ligeti, Radiohead, Tori Amos, Sondheim, and Xenakis.

Fugue, Forest, Chorale, and Toccata is akin to a mini symphony in four short interconnected movements. It started life in an eccentric fashion, as ideas for two viola ensemble pieces, Forest, for eight violas, and Fugue, Chorale, and Toccata for nine violas. This explains the awkward expansion of eight and nine part counterpoint into a twenty strong double ensemble. I have used the opposing groups colouristically. Just as one would choose a specific instrumental colour for an expressive purpose, so too did I choose the specific way in which the “teams” clash or join together. Essentially the work explores the way strict formal structures can exist not only as pure music, but as emblematic of a particular image or scenario. © Peter de Jager 2014

Swiss composer Frank Martin (1890-1974) was the son of a Calvinist minister.  Although he had decided in his teens to become a musician, he nevertheless bowed to parental pressure and studied mathematics and physics. After the first world war, however, Martin followed his heart and took intensive private tuition in harmony and composition from a number of teachers, including Emile Jacques-Dalcroze. Although he never attended a conservatory, Martin’s achievements were such that by 1943 he was president of the Swiss Musicians’ Union, and in the 1950s taught a composition class at the Cologne Hochschüle. His musical style is strongly grounded in Bach, who remained the composer’s primary reference his entire life, although he later experimented with Bulgarian rhythms, serialism and even pop music. Throughout his life Martin turned to sacred subjects, and his major works include the Passion oratorio Golgotha, a Christmas cantata and a requiem.

When Yehudi Menuhin and Edmond de Stoutz asked me to write a concerto for violin & string orchestra for them my first reaction was that it would be impossible to follow the masterpieces that J.S. Bach wrote for this same combination. I then thought that it would be better to write a suite of fairly short pieces – images relating to something or other. It was when I saw in Siena a polyptyque depicting, in a series of miniatures, the various episodes of the Passion, that I was inspired to try to express the episodes in music. As music is an abstract art I could only seek to transpose the essence of my own personal reaction to the those scenes in music.

This is what I thought and felt whilst composing the Polyptyque. Whether I have succeeded in transposing into music these very intimate impressions is another question: perhaps for some people this music may be able to help them to recreate for themselves these images of the Passion: for others they will be pieces for solo violin and two string orchestras.

Gordon Kerry lives on a hill in north-eastern Victoria. Current projects include a violin concerto, and new works for Plexus Trio with tenor Christopher Saunders, and the Syzygy Ensemble. Recent works include Aroona Dawning, for the 2013 Huntington Festival, the opera Midnight Son (with Louis Nowra) for Victorian Opera; a string quintet for Musica Viva with whom he was Featured Composer in 2012; several works composed while holding the Ian Potter Established Composer Fellowship between 2009-2011, including a Symphony for the Sydney Symphony Orchestra and a flute concerto, Captain Flinders’ Musick, for the Scottish Chamber Orchestra and Alison Mitchell. His book New Classical Music: Composing Australia was published by UNSW Press in 2009.  He was ANAM’s first composer-in-residence in 2008.

My first work for two chamber orchestras was a Nocturne composed for the students at the Australian Youth Orchestra Summer Academy in 1995 and subsequently recorded for CD by the Tasmanian Symphony Orchestra. As an aunt waspishly observed after the premiere, ‘it must have been quite a night’.

This work is quite different in character, and has no extramusical intent. For matching ensembles of five winds (though with doubling winds in the second group) and five strings, it makes use of the various antiphonal possibilities of the band, as well as offering a huge range of solos, and more conventionally orchestral use of different groups. It has a kind of ternary form with fast, often pointillistic textures in the ‘A’ sections and a more meditative slow central section. There is also an extended coda of new material in a slow compound metre to close the work.

It is dedicated to a wonderful friend and artist, Polixeni Papapetrou.  © Gordon Kerry 2014

The son of Edwardian free-thinkers (his mother was a suffragette), Michael Tippett (1905-98) always stood out from the crowd. Agnostic, pacifist, communist (briefly) and, as he was later to discover, gay, Tippett’s life tended to run against the grain of the society he was born into.  He was also a committed Jungian, and held the view that music is essential to modern life, as it alone can express certain human experiences that are otherwise suppressed by mass technology.

Tippett entered the Royal College of Music at the age of 18 with the aim of becoming a professional composer.  He did not share the precocious facility of his contemporary Benjamin Britten, and his road to proficiency was slow and painstaking.  A few years after graduating, he returned to the College for a further two years’ study in counterpoint to patch up self-diagnosed gaps in his technique.

The Concerto for Double String Orchestra (1938-9) is one of the first works to announce Tippett’s hard-won mastery. It is surprising to learn that a piece so winning, so immediately appealing, should have had such difficulty in finding acceptance. Tippett sent scores to Oxford University Press, Boosey & Hawkes and the BBC, only to receive rejection slips. In a 1993 interview for BBC radio, Tippett explained why he believed no one wanted to take it up: “When the Concerto for Double String Orchestra arrived there was nothing on the page except white notes, apparently, no sharps or flats, more or less – so people thought it was very odd, and therefore it didn’t get done.”

Tippett was right: the score is strongly diatonic and has a high quota of ‘white notes’. Melodic lines are often modal, reflecting Tippett’s love of early English polyphony. Balanced against the directness of Tippett’s harmonic language are a rich polyphony, heard within each of the two orchestras and in the way they interweave with each other, and refreshingly buoyant rhythms, kept aloft with jazzy syncopations and changes of metre.

It was the London representatives of the Schott publishing company who eventually saw the merit in Tippett’s Concerto, thus beginning a life-long relationship, and it was they who in 1943 organized the first recording. The sessions had to be supervised by Tippett’s friend Benjamin Britten, as the composer was serving a three-month prison sentence for his stance as a conscientious objector.