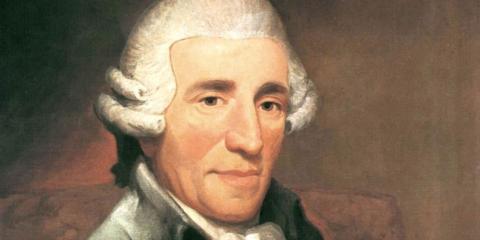 The Austrian composer, Josef Haydn (1732–1809), worked in the Esterházy court from 1761–1790. Over this long period we see the development of the composer from a court musician to one of the most celebrated and travelled composers of his day.

He wrote the Overture in D Major in 1777, but it was not published until 1786. The work was reused as an alternative finale in Symphony No. 53 (1777) and later revised as the opening movement of Symphony No. 62 (1780). The single movement is marked Allegro con spirito and is in Sonata-Allegro form. The first theme is striking and spirited and contrasts with the dolce second theme.

Johann Baptist Vanhal (1739-1813) was one of the most prolific composers of symphonies in the eighteenth century; during the 1760s and 1770s he produced more than 100 and contributed to the development of this genre with both three and four movement (fast–slow–minuet–fast) works. A Bohemian composer and teacher, he spent considerable time in Vienna. The English writer Charles Burney described Vanhal’s symphonies as “among the most complete and perfect compositions for many instruments which the art of music can boast.”

The Symphony in G minor was composed during the 1760s and published in Paris in 1774. The four movements provide a great sense of contrast. The dramatic drive of the opening Allegro moderato is contrasted to the tranquil aria-like Adagio, through to the elegant Minuetto, and concluding with the agitated Finale Allegro.

Wolfgang Amadeus Mozart (1756-1791) composed the C major Piano Concerto K 246 in Salzburg in April 1776. It is dedicated to the Countess Antonia Lützow, a fine pianist and the second wife of Johann Nepomuk Gottfried Graf Lützow, who was the Commander of the Hohensalzburg Fortress. She premiered the work in 1776; it was one of the few times that Mozart himself did not premiere a concerto.

The work is scored for solo piano, two oboes, two horns and strings. The opening movement Allegro aperto is marked by a march-like character. The Andante is a beautifully elegant movement that leads to the Rondeau finale where the main theme is in the tempo of a minuet. There is marked contrast with each of the episodes in this last movement, and when the main theme reappears it becomes more ornamented.

Stefan Cassomenos began writing music at age seven. His music has been performed extensively in Australia by leading orchestras and chamber ensembles, and has recently been featured in concerts in Greece and Germany. His works include four piano concertos, an acclaimed double violin concerto and the chamber opera Herodias which was premiered by Victorian Opera.

The composer writes: The average music consumer of today is likely to skip to the next track on their streaming platform in 8 seconds, down from around 12 seconds in 2002. The average length of songs on the top 100 charts gets shorter each year, now edging towards less than 3 minutes. My pieces are usually quite a bit longer than that, and one of my goals for 2022 was to write a piece which could be described as short. Melbourne Chamber Orchestra helped me greatly in this task by commissioning me to write a work of 2 to 3 minutes’ duration. Drawing on a few sources of inspiration, including Haydn’s brilliantly succinct keyboard concertos, Mozart’s excellent structural blueprints, and Stravinsky’s handy strategies for abbreviating musical material, “Three Minute Concerto” tests the compression limits of the piano concerto form.

Josef Haydn wrote at least 13 concerti for keyboard and orchestra. Unlike his symphonies, quartets, and concertos for cello, which are in frequent circulation, performances of the keyboard concerti are rare events, save perhaps for the D major concerto (no 11, which MCO performed with Anna Goldsworthy in 2018).

The Concerto in C major, Hob XVIII:8 is thought to have been written before Haydn’s tenure as the head of music as Esterházy, perhaps around 1757. Like many works of the period, it is only known about through a handful of sources, which offer different possibilities, not all of them authentic. It can be both an organ concerto and a concerto for harpsichord, and has been recorded on organ, harpsichord and piano. There is a Czech source with spurious horn and drum parts and a German source with ad-libitum clarino and timpani parts. A little unusually, there are no viola parts. For this performance MCO has chosen to perform the work in an intimate strings-only version.

Carl Ditters von Dittersdorf (1739-1799) was an Austrian composer and violinist. Margaret Grave and Jay Lane in their article in Grove Music Online said, “he composed voluminously despite the official responsibilities that occupied him for much of his life, and his generally high standard of craftsmanship earned him recognition as a leading figure of the Viennese Classical school.” Alongside Haydn and Mozart, Dittersdorf stands with his esteemed contemporaries Leopold Hofmann, and J.B. Vanhal in the development of symphony.

Dittersdorf composed operas, concertos, chamber music and symphonies. Apart from the early symphonies, which were generally in three movements, most of his works were in four movements with the opening movement in sonata-allegro form.

The opening Vivace of the Symphony in A minor is in sonata form and sets the dramatic character of the work. The sonorities of the individual instruments are highlighted throughout. The Larghetto is the longest of the movements and throughout there is a gentle ascending repeated figure that forms the basis of much of the dialogue between the instruments. The focus on the solo cello is the highlight of this movement. The two stately minuets lead to the Prestissimo that has an impetuous fun character with a sense of being contained and understated.